Blog #26 – A lesson in historiography

According to the handout that I gave you about Revolutionary historiography, there are two main schools of thought on how to view that time period.

The first one, the socio-economic historians (now known as Progressives for the time period during which they wrote) felt that the AR erupted because of the economic and social inequalities endured by the poor and underprivileged between the 1750s and 1760s.  The middle-class merchants were adversely affected by the new Imperial taxes and regulations, and together with the poor, forged an alliance with the “radical groups” which 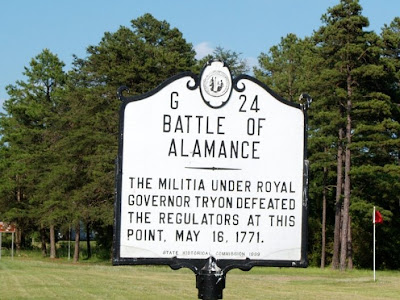 actually sparked a class struggle.  You can see this in the Regulators of North Carolina and the Paxton Boys’ rebellion in addition to the several riots mentioned by Zinn in Ch. 4, “Tyranny is Tyranny.”  More people were allowed to vote, own property, and hold elected offices. A strong federal government wasn’t allowed to exist b/c the states had strong, written constitutions.

Arthur M. Schlesinger mentioned in his 1918 book (read the text online!) on the time period that the radicals eventually lost the peace to the businessmen who wanted a stronger federal government after the AR was over because that stronger government was better at securing property rights and helped pay off a number of speculators’ debts.  Historians Mary and Oscar Handlin question Schlesinger’s assumptions by looking at class divisions both before and after the war (that there wasn’t much change), and this brings into question the whole revolutionary thesis.

The second group of historians mentioned in our article, the conservative historians (now known as consensus because they were trying to emphasize American history as a cohesive whole and not a jumble of ideas and experiments in participatory democracy) felt that the AR really was not a true revolution.  Instead, the American colonists fought to maintain “the existing democratic social order in the colonies…[and] to protect American rights and liberties against British [tyranny].”

For the most part, this was what I was taught in school and most likely so were you.  Our history teachers have tried to show us that after 1763, everything changed.  But in between 1607 and 1763, the time period called “salutary neglect,” English colonists developed their own democratic, legal and economic traditions mostly based on what they already knew – the English system.  As one of my favorite historians, Daniel Boorstin, wrote, the colonists adopted traditional English rights like trial by jury, free speech, petition, and

assembly as well as no taxation without representation.  So, in essence, the most white male colonists already exercised these rights (b/c land was available and many more Americans owned land than did Englishmen) when the British tried to interfere w/ this awesome plan.

The last observation in the article I gave you mentions that both groups, the Progressives and the Consensus historians, reflected the reality of the life that they were living at that time, and therefore their interpretation of the AR was influenced by that.  For instance, if someone wrote a history of an American war while America was currently at war, chances are, that historian’s view on the historic war might reflect the popularity of the current war or whether or not it was fought for a just cause.

In this case, the Progressives wrote at the end of the 19th / early 20th Century when big corporations ruled, unions were oppressed, and working conditions were awful.  Wages were low, and hours were long.  Concerns about those present conditions (1895-1920) surely had to have influenced the Progressives.   Conversely, the Consensus historians wrote during the post World War II era (1945-1965) in which we struggled with the Soviet Union during the Cold War (and tried to put on a united front in which democracy and capitalism have always triumphed).  But at the same time, the country was torn with internal contradictions and strife (the Civil Rights era, women’s movement, anti-war campaign, widening gap between rich and poor starting in the late 60s), so historical ethnic strife was de-emphasized.

After reading this whole thing, please answer these questions about the AR historiography:

1. Which side – Progressives or Consensus – seems to have the more persuasive argument about how to view the AR?  Why?

2. Does Howard Zinn seem to fit into these categories?  Explain your answer (I might suggest that you check out the last two links at the bottom).

3. After reading this handout and doing this blog, can you still define history as just facts, dates, and people?  Or does history include something else?  Explain.

300 words minimum for the total blog.  Due by Friday, October 21 (yes, new due date) before class begins.

http://mises.org/daily/2541 – more detailed analysis on the historiography of the AR

http://www.dcte.udel.edu/hlp/resources/revolution/ChangingInterpRevol.pdf – simple one page summary of the major American historians and who changed the interpretations.  Includes post-1965 takes on the war.

http://highered.mcgraw-hill.com/sites/0012122005/student_view0/chapter5/where_historians_disagree.html – Another great summary look at AR historiography including the latest interpretation by Gordon Wood and his groundbreaking book, The Radicalism of the American Revolution (1992).