Blog #149 – Final Exam blog – Rethinking History or Should Jackson Still Be on the $20?

In the past few years, students and adults have pushed to change the names of schools and institutions based upon the namesake’s past history.  Back in 2015, for instance, the Confederate flag was pulled down from the South Carolina capitol in the wake of the Charleston shootings (the shooter was pictured w/ Confederate memorabilia), and then the South Carolina legislature voted overwhelmingly to take the flag down.  This Economist article examines other particular cases not mentioned in the “Rethinking History”.  From another point of view, this article defends leaving the Hoover FBI federal building as it is, though some have come to question Hoover’s tough-minded, illegal wiretappings of students and Dr. King (Cointelpro).  Since the Charleston church shooting, there has been a concerted effort to begin the controversial process of taking down statues to leaders of the Confederacy throughout the South. 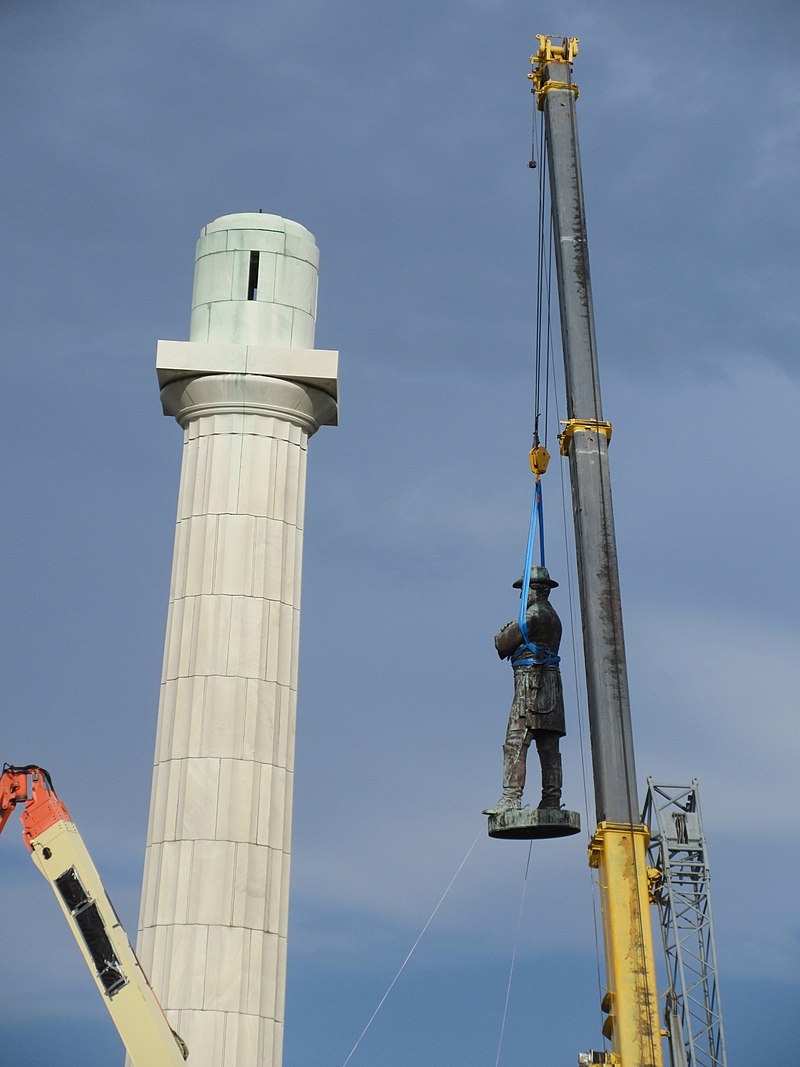 In an August 2017 statement on the monuments controversy, the American Historical Association (AHA) said that to remove a monument “is not to erase history, but rather to alter or call attention to a previous interpretation of history.” The AHA stated that most monuments were erected “without anything resembling a democratic process,” and recommended that it was “time to reconsider these decisions.” According to the AHA, most Confederate monuments were erected during the late-nineteenth and early-twentieth century, and this undertaking was “part and parcel of the initiation of legally mandated segregation and widespread disenfranchisement across the South.” According to the AHA, memorials to the Confederacy erected during in the 1890s “were intended, in part, to obscure the terrorism required to overthrow Reconstruction, and to intimidate African Americans politically and isolate them from the mainstream of public life.” A later wave of monument building coincided with the Civil Rights Movement in the 1950s and 60s, and according to the AHA “these symbols of white supremacy are still being invoked for similar purposes.”

In the summer of 2020, America had a reckoning with Confederate monuments of all types and some people started tearing down some that still remained.  Some saw these monuments as symbol of the systemic racism in the country that celebrated men who fought to keep Black folks enslaved.  Other people thought that history was being “canceled” or erased by the removal of Confederate monuments.  Some protestors even went after the large statue of Andrew Jackson in D.C. but could not pull it down (see pic below).  Then President Trump issued an executive order that would prosecute people who defaced or destroyed federal statues.

In the article, “Rethinking History,” former Princeton president and 28th President of the United States Woodrow Wilson is derided because of his racist comments.  He told a black leader in 1914 that “segregation is not humiliating, but a benefit, and ought to be so regarded 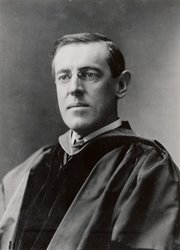 by you.”  A different example from the article is what the University of Virginia has done in the past decade in trying to honor its slave past.  At least 140 slaves helped build the university, and this fall, Virginia opened up a dorm named after two of the slaves who had worked on the campus before the Civil War.

One argument against changing the names of buildings or taking people off of our money is that our culture has become incredibly mired in political correctness.  We are too worried about offending people, the argument goes, so we make decisions like these to make sure no one gets triggered.  An argument for changing the names of buildings (like was recently done to Cobo Hall down town after people began to rethink the Detroit mayor’s stance against blacks integrating white neighborhoods in the 1950s) is that some things need to be fixed because having your name on a building is an honor.  Are we finally recognizing the faults of the past and trying to make amends for them, because our nation, though it’s been a melting pot since its inception, is really starting to change?  Or, can we learn something from the past instead of erasing it and blocking the things which we find disturbing?

This brings us to Andrew Jackson.  This NY Times article  from 2015 suggested putting a woman’s face on the 20$ bill.

“Jackson was a slave owner whose decisions annihilated American Indian tribes of the Southeast. He also hated paper currency and vetoed the reauthorization of the Second Bank of the United States, a predecessor of the Federal Reserve. Jackson is in the history books, but there’s no reason to keep him in our wallets.”

His record with the Indian Removal Act, his battles w/ Nicholas Biddle and the 2nd BUS, and the fact that he was a slave owner all count against him.  But what about his adoption of an Indian boy during one of the campaigns to eradicate the Indians?  Did America actually benefit from not having a central banking system for almost 80 years?  He was a symbol of the common man, those who could newly vote in the elections of 1828 and 1832 voted for him overwhelmingly, because he was a common man at one time.  But he was also an exceptional man, having fought in the War of 1812, amassed a fortune (though off the backs of slaves), and become the 7th president of the United States.  There are very very few people who can claim these achievements. 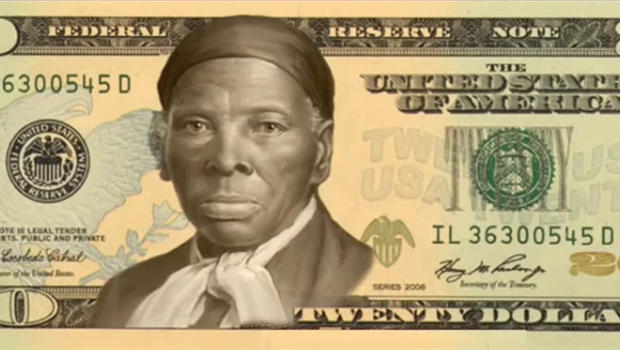 Andrew Jackson was first honored by being on the $20 beginning in 1928 (to coincide w/ the 100th anniversary of his electio).  Before that, Presidents Grover Cleveland and George Washington were on the bill as well as former Treasury Secretary Alexander Hamilton and also Lady Liberty.  Then the idea came about of putting a woman on the $20 beginning in the year 2020 to commemorate the 100th anniversary of the passage of the 19th Amendment giving women the right to vote.  Several women were finalists, but in 2015, Harriet Tubman won a poll and was originally slated to replace Hamilton on the $10, but because of the immense popularity of the play, the decision was made to then replace Jackson on the $20 a year later.  Then candidate Trump in 2016 said that he thought Tubman was fantastic but opposed replacing Jackson becuase it would be “political correctness” that replaced him.  In mid 2017, Treasury Secretary Steve Mnuchin stated that  “People have been on the bills for a long period of time. This is something we’ll consider; right now we have a lot more important issues to focus on.”  He also stated that any new bill wouldn’t be ready until 2026 despite engravers at the Bureau of Engraving and Printing stated that there was already a bill in the works by 2019.  And according to the latest article I could find about this in 2021, the Biden administration supports Tubman on the $20 but hasn’t taken any action as of that article to make that happen.  So, the future of the $20 is up in the air. 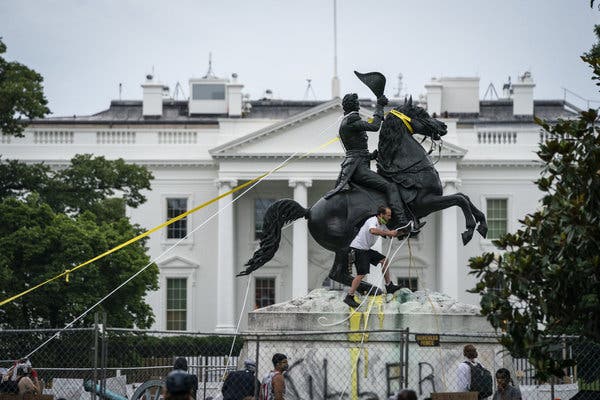 But if we remove Jackson from the $20 and replace him with someone else, where do we stop?  Using the slippery slope argument (which is always a dangerous fallacy), do we rename Washington D.C. because Washington was a slave holder?  Do we take Lincoln off of the penny or the $5 because he had almost 30 Indians executed during the Civil War for sparking an uprising in Minnesota?  Jefferson… we won’t even get into him.

As someone in the “Rethinking History” article states, if we are going to name buildings after people, should we expect them to be perfect?  Maybe we should stop naming buildings after people.  Or can we learn something from these flawed individuals (especially b/c everyone is flawed in some way or another)?

350 words minimum total for all three answers.  Due Tuesday night by midnight, November 22.