Blog #116 – Historiography of the Constitution

Historiography is the history of the history, or how interpretations of an event have changed over the years.  Usually, historians reflect the main concerns of the time period in which they write (for instance, Progressive historians are concerned about economic factors driving events because they wrote during the reform-minded era, the Progressive Era -1900-1915).  Sometimes, enough historians write in a similar viewpoint that history scholars call them historical schools of thought (Nationalist, Progressive, Consensus, New Left, etc.).  And sometimes, these schools of thought are dominated by an historian who writes an incredibly influential book on that subject (Charles Beard, An Economic Interpretation of the Constitution).  One of the things that I hope you understand from this look at historiography is that the history of events and their interpretations are constantly changing.  Here is a link to a wikipedia page on general U.S. historiography – https://en.wikipedia.org/wiki/Historiography_of_the_United_States

Before the Civil War (1861-65), many people were focused on who the Constitution put in charge of the nation: the states or the federal government?  Also, many controversies surfaced in whether they should interpret the Constitution literally as written (strict interpretation) or to interpret the Founders’ intent (loose interpretation).  It seems that the writers of this document weren’t ready to answer those questions either in Philadelphia in 1787 and wanted to leave some wiggle room for interpretation for future generations (this is my loose interpretation).  The Civil War ended this controversy with the federal government enforcing its supremacy over the  states in the defeat on the Confederacy.

George Bancroft began writing his epic history of the U.S. before the Civil War and continued until 1887.  His first volume, found here, covers from the early voyages to the New World until the Glorious Revolution in England in 1688 (for us in APUSH, this history ignored the Native Americans in Ch. 1 and focused primarily on the Spanish and the founding of the colonies up until 1688 – over 600 pages in his first volume!).  Bancroft and other historians wrote American history reflecting the Gilded Age and American economic growth, railroad expansion, the closing of the interior frontier, and their beliefs in Anglo-Saxon superiority.  Nationalist writers believed that “the orderly progress of mankind toward greater personal liberty” was due to white Christian people and their inherent ability to build strong governments.

Nationalists viewed the creation of the Constitution as an extension of the Revolution.  The Articles of Confederation were too weak to deal with internal threats and problems (Shays Rebellion, economic depression) or with external threats (Spain and England).  The American people were divinely picked by God (“City on a hill”?  American exceptionallism?) to create a perfect republic, and the men at Philly were creating a new government for the betterment of the nation.

This time period saw many people concerned about the effects of massive wealth redistribution that widened the gap between rich and poor, in addition to the negative effects of urbanization and industrialization (slums, poor working conditions, low wages).   This era saw a huge uptick in reforms that attempted to solve these problems.  Carl Becker saw the Revolution as two concurrent changes: one to break away from British rule, and another as to who will rule at home (which culminates in the Constitution).  Charles A. Beard was the one of leading historians of the time with his popular 1913 book, An Economic Interpretation of the Constitution of the U.S.(found here). 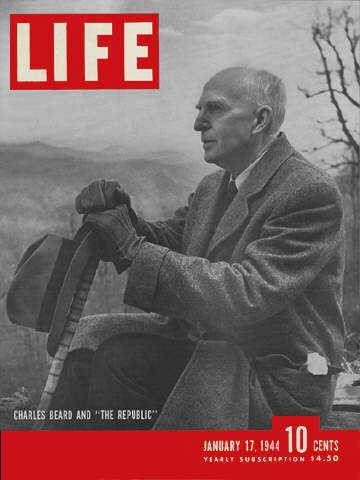 Beard found that the men who made the Constitution had strong economic motives to ensure a powerful federal government because “most of these men held public securities, a form of personal property that would increase dramatically in value” if a new government was strong and improved its credit rating.  These conservative men had economic interests in banking, public securities (or bonds and promissory notes to Revolutionary war soldiers), manufacturers, and merchants involved in shipping and trade.  All of these economic interests declined because of the weakness of the Articles of Confederation.  Those who opposed the Constitution were working men and small farmers who were deep in debt.  Our new document was designed to protect private property against state assemblies that were much more democratic and likely to protect small farmers and debtors.  Beard also saw the creation of the Constitution as undemocratic because there were no “common men” involved, and the proceedings were done in secret.  Also, there was no bill of rights protection for Americans, unlike many state constitutions.  Beard’s primary focus in his history is class conflict.

After World War II, some historians moved away from the class conflict interpretation of American history and shifted toward consensus.  Because we were engaged in the Cold War with Russians (a country whose ideology is steeped in class conflict – Marxism), consensus historians de-emphasized class conflict and taught that our conflicts are steeped in competition of businessmen and entreprenuers that has made America great.  These historians are somewhat throwbacks to the Nationalist school who wanted to strengthen America “as a world leader with a history as a strong and united country free from class-based oppression”.  “The cement holding us together is our widespread prosperity and universal acceptance of the principles succinctly summarized in the first parts of the Declaration of Independence and the Constitution.  Our political struggles have always been within the center rather than between the left and right extremists.”

They saw the Revolution and Constitution as one continuous movement (as opposed to Beard’s democratic revolution against the British and a conservative counter-revolution for private property with the Constitution), and that the state constitutions were created by the same people who signed the Declaration of Independence.  Consensus historians saw the Constitution as primarily a political document, not economic like Beard.  The delegates at the convention were primarily concerned with making a better government than the Articles, one that was based upon “representation, fixed elections, a written constitution that is a supreme law and contains an amendment clause, separation of powers and checks and balances, a bicameral legislature, a single executive, and a separate court system.”  These historians challenged Beard’s assertion that the poor didn’t have a say in the Constitution, stating that 2/3 of men at this time owned enough property to vote in state elections, many of whom were small farmers.  These historians include two of my favorites, Daniel Boorstin and Richard Hofstadter.

This group of historians is dominated by Gordon Wood and Bernard Bailyn.  These two assert that Americans adopted many British ideas like anti-authoritarianism, written constitutions, compact theory, and human rights.  Both the Federalists and Anti-Federalists shared a major distrust of central government, and that the 1770s and 80s saw a big push for egalitarianism (push for equality) that the Constitution tried to restrain.  The Constitution, essentially, was a rescue attempt to save the Revolution from failure by restraining its democratic excesses. “Revolutionary Republicanism was centered on limiting corruption and greed. Virtue was of the utmost importance for citizens and representatives. Revolutionaries took a lesson from ancient Rome, they knew it was necessary to avoid the luxury that had destroyed the Empire.[33] A virtuous citizen was one that ignored monetary compensation and made a commitment to resist and eradicate corruption. The Republic was sacred; therefore it is necessary to served the state in a truly representative way, ignoring self-interest and individual will. Republicanism required the service of those who were willing to give up their own interests for a common good. According to Bernard Bailyn, “The preservation of liberty rested on the ability of the people to maintain effective checks on wielders of power and hence in the last analysis rested on the vigilance and moral stamina of the people.” Virtuous citizens needed to be strong defenders of liberty and challenge the corruption and greed in government. The duty of the virtuous citizen become a foundation for the American Revolution.”

These historians were shaped by the social and political changes going on in the U.S. like the Civil Rights and women’s rights movement and the student protest movements against the Vietnam War.  They are a throwback to the Progressive Era, but some writers thought that Beard had oversimplified things with his strictly economic approach.  Beard did not include many of the people who were not part of the political process in the Revolutionary Era: blacks (both free and slave), women, and Native Americans.  Social historians began to weave their stories within the tapestry of American history and present a fuller picture. “The “new” theoretically differentiates them from the unimaginative, Socialist Party orientation of the old left of the 1930s and 1940s.  The “left” signifies an orientation toward methods and concepts that focus on the masses and their experiences, “history from the bottom up,” as it is called.  Unlike the old left, the New Left avoids the preconceived molds of Marxist theories, which distorted the facts to fit a foreign doctrine.  The historians of the New Left demand the inclusion of those features of our history that explain how we came to be a violent, racist, repressive society.”  Some of these historians are Gary Nash  and Howard Zinn (Took the negative side in the Columbus debate).

This video is here just for your interest.

Nash, in particular, looks at both Northerners and Southerners deeply involved in making the Constitution a stamp of approval for slavery since it guaranteed slavery with a fugitive slave clause and the South’s boost in Congressional representation with the 3/5 Compromise.  Other historians argued against the Consensus historians’ assertion that our political legacy is basically liberal and democratic.  The time period of the 1780s -leading up to the Constitutional Convention – was time of disruption, overtaxation, and heavy economic hardships.  The poor were forced to pay their taxes in gold and silver (extremely hard to get) and not allowed to use paper money.   This school’s approach refocuses on class conflict in which different segments argued over who’s responsible for fixing the economy, “which segment should sacrifice for the good of the whole.”

I’ve presented you with four different schools of historiography concerning the Constitution.  Your job is to explain, with plenty of examples from class and your readings (Socratic Seminar readings, and don’t forget “The Meanings of the Constitution” (pgs. 164-65) as mentioned in the Google Docs:

1. Which school of history do you agree with most and why?;

2. Which school of history do you disagree with most and why?

54 thoughts on “Blog #116 – Historiography of the Constitution”